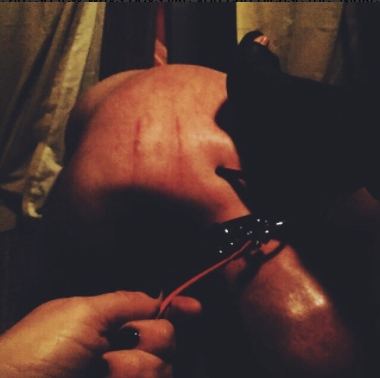 “You are lava.” I say. “See how the blood rises to the surface pooling under these welts? Feel their warmth? You feel hot. Like lava.” My fingers graze the surface of his raised flesh, tracing the marks I’ve given him like you trace a route on a map when you’re trying to find your way home.

“I’m lava,” he mumbles and nestles his head into the space between my shoulder and neck. My hand gathers up his hair and I hold him in his place. I smell the sweetness of my scent commingling with his musk. Our scents merge into an intoxicating aroma.

I approach him from behind. He closes his eyes and turns inward. I crack my whip and air passes by his ear like a light breeze. I hold my whip, feeling the buttery leather hide in my hand. When I hold my whip I feel as if there is an electric pulsation from my cunt to the tip of my whip, as if the whip were just an extension of my sex. I take my time, enjoying dancing with my whip as I get my aim. I allow the whip to gently fall to his shoulders and he starts to sweat even more.

He is sweating. Not just from the heat of the room. Not because his hands are bound tightly to his body. Not from fear of pain, but from the fear that I am taking him to where he needs to be. That this dance is the perfect act of symbiosis. Through a whisper, he begs to be whipped harder. “Please, Mistress,” he says. I have his wrists and feet secured to suspension points in the ceiling and floor helping to hold him up. His head is cocked to his left and his eyes are softly closed. He looks serene.

I throw my whip and it wraps around his chest so that the entirety of his torso is encompassed by my whip. It strikes his back and wraps around to his ribs. My whip meets his flesh, making a noise that sounds as if he is hollow. His sweat is trapped between the crevices of his body and and he tries not to cry. He wants more.

I give it to him. His breath is no longer his. With each strike, his breath belongs more and more to me. I dance with my whip, giving him more, coming over to feel what I’ve given him. I feel where the flesh is already raised and hot. When I come over, I ask how he is doing. He tells me, “I am lava,” and smiles.

I give him more and he makes less noise. His eyes are closed, he is passing through a place beyond darkness to a place darker than the cover that just closed eyes provide. Where he is just a body, the place where he craves to go. A place where he can feel the whip, and know that it hurts and not need to make any noise. I call him back and place my palm on his chest and whisper into his ear, “I am going to see if I can get the whip to reach your heart.” He moans with pleasure.

I leave him standing with his damp skin met with the cool dungeon air and the dependable thud of the whip. He is smiling, crying, shaking and possibly laughing. I am inside the pain and darkness with him and inside of his body and mind. That is why it is so dark. I am in his heart, welcoming and beckoning the whip.

I approach him and lay my hands on his flesh and hold him in. My hands encourage him to sink down on the ground. He is small and wants to be smaller. He rests his head on my lap. “Thank you,” he smiles. “I am a sack of potatoes. I am human. I am lava.”