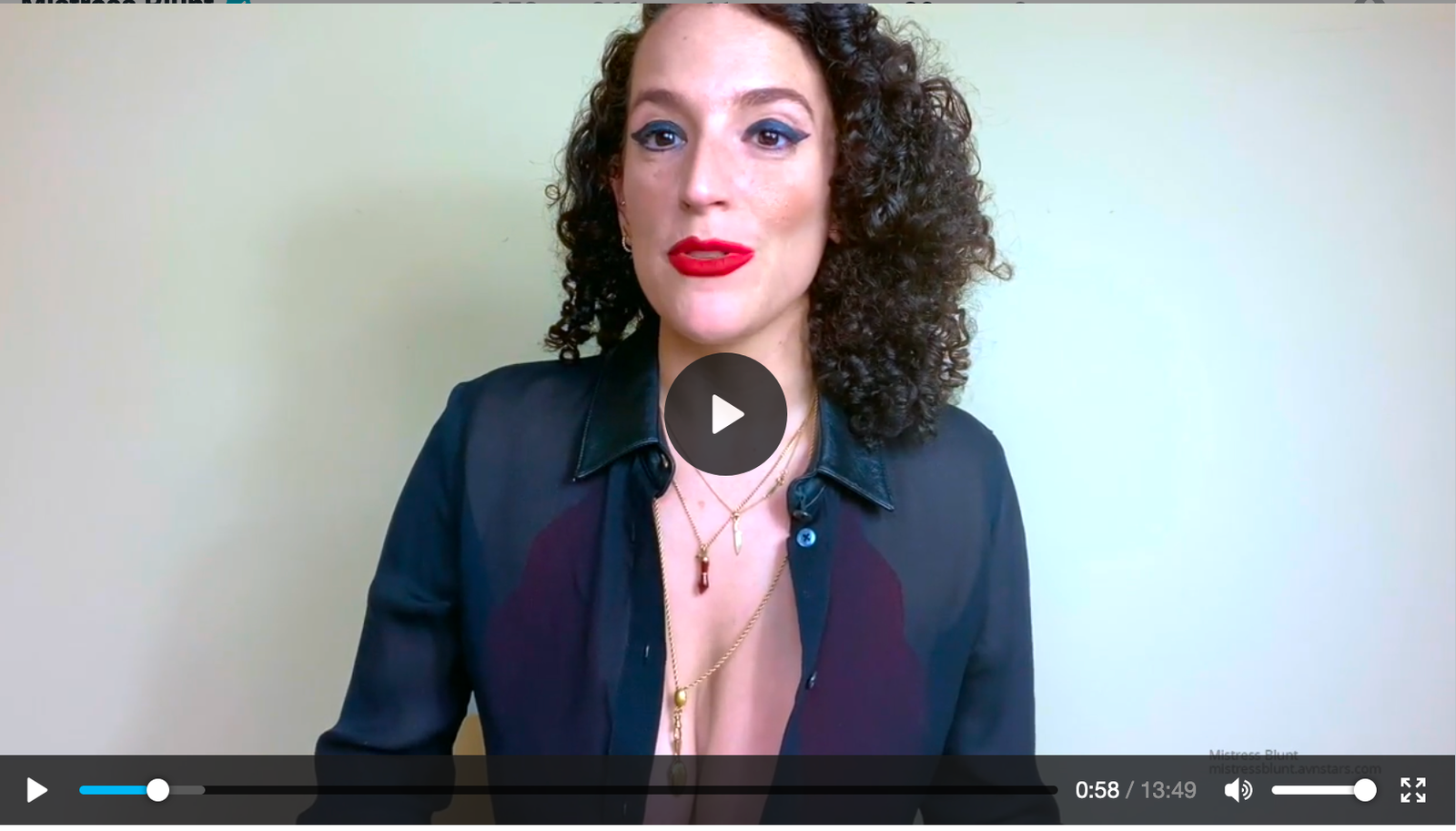 You can watch the clip where I speak about topping from the bottom here.

I’m really excited to dive into topping from the bottom. First, let’s start with the basics. Sometimes I make the assumption that people know what certain terms and terminologies are, and I’m trying really hard not to do that.

Topping from the bottom is when someone who is in the bottom role or the submissive role is guiding the dominant. It’s an inversion of power dynamics.

For me personally, it isn’t really fun.

But one thing that I’ve noticed about people who say, “I don’t want to top from the bottom” is that sometimes what they actually want is for their dominant to be a mind reader.

I want to break down some of the differences between topping from the bottom. There’s a difference between being a submissive who’s able to express yourself and setting your Domme up for success, and just asking them to shoot in the dark (which is really serving no one).

“Whatever you want, Mistress.”

When people fill out my contact form, I ask, “What are you interested in exploring in session with me?” And I get so many responses from strangers that say, “Whatever you want, Mistress.” While that sounds really hot in theory, you don’t know me and you don’t know my interests.

If you’re saying that you don’t have boundaries, my immediate response is, “How about we make a snuff film?” I think that’s a really fast way to make people realize the importance of having boundaries.

So I want to give people a little bit of insight into what it’s like on the receiving end of those emails (and what’s really helpful for me as a Domme).

Over the last 12 years, I’ve spent a lot of time and energy crafting my contact form to provide me with the information that I really need to have a successful session. I have questions there that are a lot different than a lot of other dominatrixes.

One of my favorites is, “When was the last time you cried?” I think it’s a really fascinating question and if you feel so inclined, you’re welcome to message me on AVN Stars with the last time that you cried.

I find that gives me a little bit of insight into how in touch someone is with what they’re feeling, which gives me important information about the ways that I’m going to interact with the submissive in the session.

For example, someone might tell me that they haven’t cried—and I hear this a lot (especially from men)—since their dad died or something similar. It is something that I’d say around 20% of men say to me on my inquiry form.

To me, that says I might be working with someone who isn’t as in touch with their feelings, so there might be more checking in that I’m doing.

Checking in to understand how it’s being perceived, both by the individual and by the person who is guiding the scene.

That’s something that I find really important.

I want to get back to when people say, “You can do whatever you want to me.” I have heard it so many times: “I don’t like to tell a Domme what to do because it feels like it’s topping from the bottom.”

People who say that they don’t want to top from the bottom… what they really want is a mind reader, so I want to sort of break that down a little bit further.

But if you’re interested in exploring a real power dynamic and a D/s power exchange, I personally find it a hindrance.

There’s a difference between a submissive being like, “Mistress, this position is uncomfortable and unsustainable for me. May I please move?” and someone being like, “This is the only way that I want to receive pain. This is how a spanking should happen. This is how I would like to be positioned over your knee. This is X, Y, and Z.”

Both are fine. But the latter just doesn’t work for me in a session. I find it harder to access the dominant headspace that I personally enjoy.

Expecting your Domme to be a mind reader

I like to have a little bit of information about my submissive, to make the magic together. That’s just how I work.

I don’t think there’s anything necessarily wrong with topping from the bottom. I think it’s just something that you should be aware of, if you do it. I think that will help you find the Domme that works for you, one who will really enjoy having a little bit more guidance on what to do.

What I’ve noticed is that people who say that they don’t want to “top from the bottom”—and I use air quotes—are people who want you to be a mind reader. Worse, they usually actually know exactly what they want.

Then there’s also people who are too scared to ask for what they want.

Forcing someone to ask me for what they want is also a recipe for a hot scene, I think. Forcing people to articulate desires that they’ve never said out loud to anyone but me? That’s hot.

I want to tell the story of one person who I worked with who didn’t want to top from the bottom and instead set me up for failure.

Now, I still got to the bottom of his desires because I’m good at my job and I forced the words out of his mouth, but he was very adamant about not telling me what he wanted.

I was really annoyed with him because I could tell he knew exactly what he wanted. When I’m trying to figure it out what someone’s into, I’ll try different tactics and see how they land with that person.

This person was definitely into heavy feminization play and they had a very specific phrase that they wanted to hear that aroused them beyond anything else I could possibly do.

Instead of giving me the ammunition that I needed and desired to conduct a successful feminization scene, they just wanted me to run through things until I landed where they wanted me to land all along.

I forced them to vocalize their desire. I was using their erection as a barometer for my success in this particular scene (not always a good measurement tool, of course).

It would’ve been much more enjoyable for me—and they would have gotten what they wanted out of the scene much faster—had they been able to say the words they knew they wanted to hear during our initial negotiations.

When there’s an individual who says that they don’t want to top from the bottom, often what they really want is a mind reader. Usually their desire is so concrete, but involves some sort of power exchange that they worry they’re somehow eradicating by asking for what they want.

What to do if you top from the bottom and don’t want to?

Someone telling me, “Mistress, this phrase turns me to mush. I would be such putty in your hands if these words were to leave your mouth.” First of all, that’s hot. I like when people beg.

I have my contact form filled out in a very specific way to very quickly and efficiently assess someone’s interests, where they’re at, what they’re saying to me, and—more importantly—what they’re not saying to me.

Over the years, I’ve gotten very good at figuring out what it is that’s not being said to me and then using that. But when I ask what someone is interested in, I’m not asking them to top me from the bottom. I’m asking them to give me the information that I need to efficiently and successfully conduct a scene that is enjoyable for both of us.

Asking for what you want and subspace

I can only speak for myself as a dominant, but when someone tells me what it is that they’re interested in, I get really excited.

For me, a lot of my sessions are about D/s dynamics, about finding those really juicy altered states of consciousness through bringing someone into subspace. For me, if someone knows what they want, entering top space is so much easier.

It makes my work and my headspace so much more enjoyable when I know what someone wants because what I want as a top is to play with that vulnerability that’s being given to me. And if you know what makes you vulnerable, I want you to share that with me!

I don’t think this is true for every top, but I have specific activities that I’m interested in and I love when those interests align with someone else’s interests.

I have things that I’m not interested in and that I’m not going to do. So, a session with foot worship and whipping sounds great to me. But if you’re into X, Y, and Z other things I enjoy slightly less, it’s less about the specific thing that we’re doing and more about where it takes you.

Those are just a few of my thoughts on topping from the bottom. I think we also got a little bit into asking for what you want and begging, which I can get into more at a later date.

In the meantime, I would love to hear your thoughts on topping from the bottom.

If you are interested in chatting with me about topping from the bottom, I am free for web-based consultations and coffee dates! Book here.

Can’t connect in person? You can learn more about me by subscribing to my exclusive content on AVN Stars, checking out my clips on IWantClips, or texting me your dirty secrets on Niteflirt and SextPanther. I am also accepting virtual sessions, which you can book here!